I started the New Year horizontal, felled by the flu and/or exhaustion. I suppose this is my excuse for watching the Real Housewives of Beverly Hills marathon over the weekend, not that I need one.

I LOVE THE REAL HOUSEWIVES.

While I’m sometimes squeamish shoving Star and In Touch under the arugula and skim milk in my grocery basket, I proudly watch those plucked and tucked ladies with the blinds wide open, all the better to let the sun shine on their spray tans.

Me and Shaz, trying like hell to look fierce in front of “The Bailey Agency School of Fashion.” Sunglasses: Thierry Lasry. Crazy pants: Henrik Vibskov.

When Jslow lived in Brooklyn a few blocks from Alex and Simon’s brownstown, I begged her to take me there, hoping to pounce when they popped out for a Pinkberry. Last year, when I visited Ashley in Atlanta, we built our day around driving out to Glenwood Park to visit Cynthia Bailey’s modeling agency and drive by her house. I’ve lost my shit over running into Ramona Singer and I’m dying to go to Pump the next time I’m in LA.

I’m currently obsessed with this season of the Real Housewives of Beverly Hills, especially since they dumped the Goth and the Beauty Queen (zzzz) and welcomed Lisa Rinna and Eileen Davidson (Y&R’s Ashley fucking Abbot!!!*), soap stars who helped pioneer cat fights and cleavage.

She’s best known from her work as Billie Reed on Days of our Lives and Taylor on Melrose Place. Actually, scratch that. It’s her massive mouth, those fantastically fake larger-than-life lips that took her to the top of the soap-pop culture heap.

Watching her on the RHOBH has been a revelation: she’s honest, down-to-earth, and far more sweet than her pout would dictate. The irony is that as the QUEEN of openly extreme plastic surgery, she’s far more normal than 99.9% of the other housewives who plead the 5th about their stretched and stuffed looks.

Since Lisa is my age, I’ve particularly loved her thoughts on getting older in a day and age where youth is perched higher on a pedestal then ever before. Rather than letting go and cowering down, she embraces her age and climbs high with a sense of humor.

A few weeks back, she met with her newly hired millennial agent, who will “work day and night to help me stay relevant.” He read her a list of potential acting jobs, one which noted the character “stays youthful and relevant with highlights.” she laughed and said, “I’m game.”

She adds that she doesn’t say no very often, and has an open mind and says “yes” a lot. Which she did when she was approached a few years back by Depends. Yes, adult diapers. And the beautiful part? She makes no apologies. She laughs that Depends “saved my bacon” and that she made more money on that than anything else.

While incontinence is one middle age malady yet to inflict me, I do have friends who have leaked from laughing or a particularly aggressive sneeze. Knowing Lisa Rinna deals with this too — or at least pretends to — doesn’t make it so bad.

Which is also the point. We are all in this together, and as Lisa aptly states, “to age is inevitable, and I’m going to do it the best I can.”

Who would have thought that some of the most real aging advice I’ve ever heard would come from the fakest lips ever. 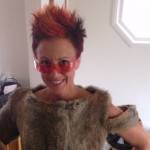 If You Can’t Read This, Lookie Here.

The Little Ideas That Could

The Election Is In The Bag