During the past few weeks where all hell has broken loose in pop culture and society (and Trump dug Sarah Palin out of the bargain bin, reminding us that some things should get tossed straight into the trash), the sharp contrast between crap and quality reminds us all how truly special David Bowie was.

Our generation grew up with his insane, immaculate, incredible music and persona. He made those of us who felt like outsiders feel less alone in a world we felt too weird to participate in. He was in every way an original, and we were able to watch him transform from Ziggy Stardust to a dashingly dapper musical elder statesman, the incredible Iman quietly at his side. 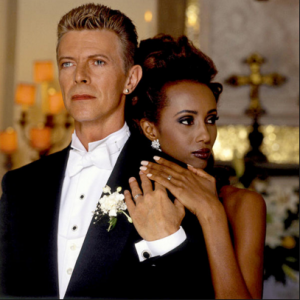 During his prolific career, he let it all out onstage, while at home he was, as Iman has said, “David Jones” – the guy at home, no makeup, no costumes, no microphone. I’ve loved rediscovering all of the great things about David Bowie during these past few weeks, especially this video from 1983 where he criticizes MTV for featuring so few black artists.

It occurred to me, having watched MTV over the last few months, that’s it’s a solid enterprise, really. It’s got a lot going for it. I’m just floored by the fact that there are so few black artists featured on it. Why is that?

And then there was this gem from a Facebook friend, which puts in perspective the difference between the true genius and class of Bowie versus so many other musical artists…including the Biebs:

“Yesterday I played tennis while Justin Bieber took a private lesson on the court next to me. He wore hip hop khakis, a hoodie, and club sneakers. Two members of his posse, young black men, were there to take videos and fend off fans or paparazzi. As is customary in a tennis lesson the student helps the teacher pick up balls once the hopper is empty. Justin said he was in a hurry and instructed his entourage to fetch balls while he continued his lesson. Outside the fence, someone snapped a photo and the Biebs rushed over and yelled at them to stop. The lesson ended. RIP David Bowie.”

Of course, near and dear to our hearts, was his wacked out and avant garde style that was so purely him. He changed his style more dramatically than any other musician in history, and used fashion to express himself and communicate his individuality, to tell stories. He didn’t follow any trends or rules. He broke it all to hell. Thank god. Here’s a great piece with photos of his various looks throughout his career.

Listening to and loving David Bowie will never go out of style. Biebs and your ilk, well, that’s quite another story. xo

Knocked Flat By My Old Flat

This Little Piggy Went to Saks